Not every radon system is identical, nor the skills used to install them. Over the years, we have seen only too many sub-standard installations and sloppy, sometimes dangerous, craftsmanship. We present our Hall of Shame below, so that you can avoid making the same mistakes as these unlucky folks. 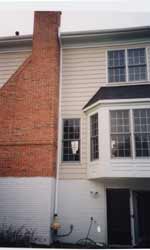 Vent discharge point corrected by RAS is now 2 feet above adjacent windows and is fitted with a screen at the vent outlet, as per EPA standards. 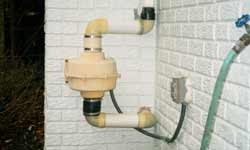 Same sub-standard radon system: no outdoor on/off switch for fan: unit is hardwired into outdoor electrical receptacle; System constructed of thin-walled schedule 20 pipe. Compare aesthetic aspects of this system to some of ours. 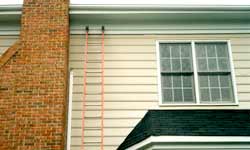 Vent discharge point on this system is level with and 5 feet from window. EPA requires a minimum of 10 feet sideways or 2 feet above windows or vents into treated air spaces such as bathroom fan vents. 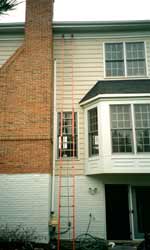 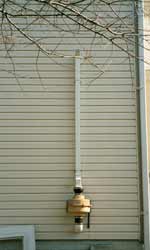 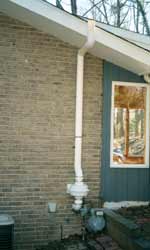 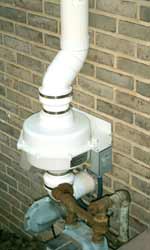 This system has a number of deficiencies: The on/off switch is attached directly to the fan. This requires that power be cut inside the home in order to change or service the fan. The wall penetrations are sealed with silicone caulk instead of polyurethane sealant. The exterior vent pipe is constructed out of thin-walled schedule 20 pipe which becomes brittle and breaks easily when exposed to weather. Also, there is no screening secured in the vent discharge point, which is a violation of EPA radon mitigation standards. This sub-standard system was installed by a certified radon mitigation contractor. 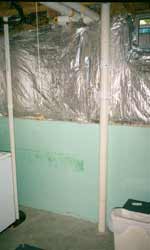 The radon vent pipe of this cut-rate system was installed a few feet from an unsealed sump crock, just visible at foot of washing machine at lower left of photo. 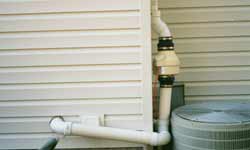 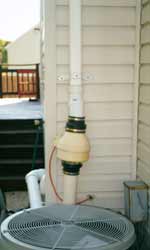 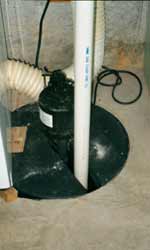 The unsealed sump crock of the ineffective cut-rate system. The floor-to-wall joint of this basement was left unsealed as well. 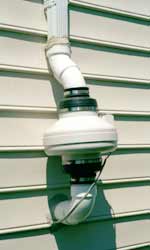 Sloppy installation of a radon fan. Fan is not mounted plumb or level as required; No outdoor weather-proof on/off switch as required by National Mechanical Code; Sloppy caulking of joints and wall penetration; 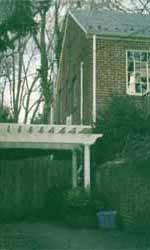 The fan is completely out of level. This causes torque on the fan motor bearings and water accumulation inside the fan housing from condensation and/or rain, which considerably shortens the useful life of the fan. 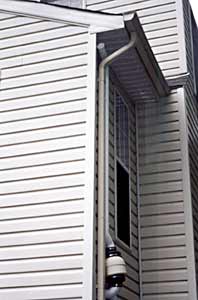 The vent pipe discharge point is under the overhang and approximately 3 feet from the window. EPA’s Radon Mitigation Standards require vent discharge points to be above the roofline, and no less than 10 feet sideways or 2 feet above any windows or vents. 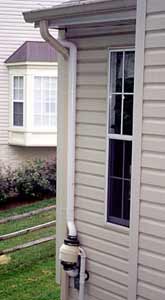 One of our competitor’s incorrectly constructed systems.